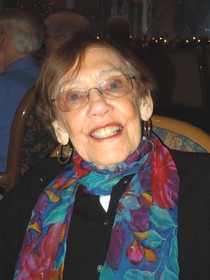 Thelma Hilger Hunter , 88, of Portsmouth, went to be with the Lord on Sunday, December 7, 2014 at Hill View Retirement Center.  She was born on December 25, 1925 near Camp Dix, Kentucky, to Charles Edward and Della Cooper Hilger.  She was married to Roy Lee Hunter in June, 1996, who preceded her in death in 2006.  Thelma was also preceded in death by an infant brother, Tommie Hilger, and a sister, Rosemary Shoemaker.

Thelma was retired from Marting’s Department Store and worshipped at Christ’s Community Church.  Thelma had a bright smile and a heart for helping others.

A funeral service will be held on Thursday, December 11 th at 12:00 Noon in the Chapel at Christ’s Community Church with Pastors Rick Clark and Ralph Clay officiating.  Visitation will begin one hour prior to the service.  It was Thelma’s wish that donations be sent to the Steven A. Hunter Hope Fund, P. O. Box 802, Portsmouth, OH  45662 to help feed local hungry children.  Arrangements are under the direction of the BRANT FUNERAL HOME IN SCIOTOVILLE.

To order memorial trees or send flowers to the family in memory of Thelma Hunter, please visit our flower store.