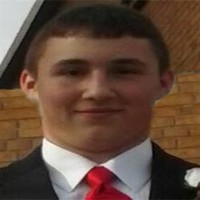 Quintin N. Howard , 17, of Sciotoville, died at 11:30 A.M. on Saturday, May 25, 2013, at Grant Medical Center in Columbus as the result of a single vehicle accident on Friday.  Born on August 23, 1995 in Portsmouth, he was a senior at East High School, where he was a football player and in the weight lifting program, and was a part-time employee of the Brant Funeral Service.  Upon his death, Quintin was an organ donor.  Preceding him in death were his great grandparents, Clifford and Gladys Howard and Delores Charles.  Surviving are his grandparents with whom he resided, David and Dee Dee Howard of Sciotoville, his great-grandparents, Marvin and Karen Charles of South Webster, his mother, Marvina Howard (Norman Jackson) of Sciotoville, brothers, Jacob (Jennifer) Howard serving in the U.S. Army in Hawaii, Holden (Amber) Howard of Sciotoville, James Lockhart and Dillon Jackson, sisters, Lauren Lockhart and Halley Jackson, his ‘lil sissy, Nariah, and the love of his life, Megan Hiles of Wheelersburg.  Also surviving are uncles, David (Sharon) Howard of Jackson and Richie (Lindsay) Howard of New Boston, aunts Lynn (Chris) Leslie of West Portsmouth and  Missy (Rodney) Howard of Portsmouth, his honorary father, Jeff (Billie) Ray and several additional aunts, uncles, cousins, nieces and nephews, and numerous friends.  A Celebration of Life will be held at 11:00 a.m. on Saturday at East High School with Bill Shope as moderator.  Interment will be in Vernon Cemetery.  The family will receive friends at the BRANT FUNERAL HOME IN SCIOTOVILLE from 4:00 until 8:00 p.m. on Friday.

To order memorial trees or send flowers to the family in memory of Quintin Howard, please visit our flower store.