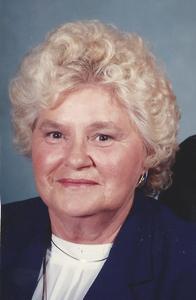 Naomi Stone , 85, of Portsmouth, died Tuesday, August 27, 2013 at the Southern Ohio Medical Center.  Born on May 22, 1928 in Portsmouth, she was a daughter of the late Ingram and Pearl Brewer Buchanan.  Naomi was a graduate of East High School and was a member of the Milldale Road Church of Christ in Christian Union.

Also preceding her in death were her husband, Harry C. Stone, a brother, James Buchanan and a sister, Mae Brown.

A Celebration of Life will be held at 1:00 p.m. on Friday at the BRANT FUNERAL HOME IN SCIOTOVILLE with Harold Cox officiating.  Interment will be in the Memorial Burial Park.  The family will receive friends at Brant’s from 4:00 p.m. until 8:00 p.m. on Thursday and from noon until 1:00 p.m. on Friday.  Memorial contributions may be made to Shriner’s Hospital in Cincinnati.

To order memorial trees or send flowers to the family in memory of Naomi Stone, please visit our flower store.