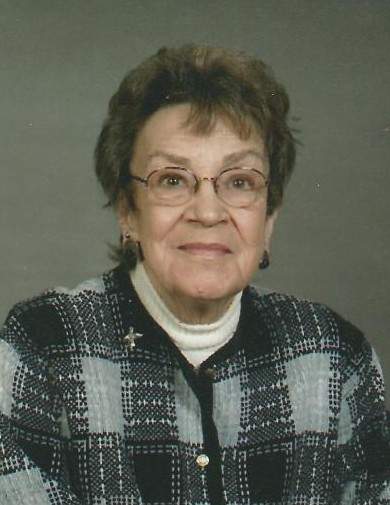 R. Maxine Goad, 90, of Portsmouth, departed her earthly life on Sunday, February 26, 2017.  The youngest of twelve children, she was born on September 19, 1926 and was a daughter of the late Isaac and Sinda Jane Jordon Moore.

Maxine was a member of Temple Baptist Church, former active member of the Federated Democrat Women’s Club of Scioto County, having served several times as secretary.  She was also a volunteer for Meals on Wheels.

A 1944 graduate of Portsmouth High School, she was actively involved in planning several class reunions.

Maxine retired form Marting’s Department Store in 1988 after 20 years of service as executive secretary, 5 years in the personnel office and in 1992 was inducted into Marting’s Hall of Honor.

Following her retirement, she became employed in the Scioto County Treasurer’s Office for 9 years, retiring once again in 1997.

Surviving are a loving daughter-in-law, Mary Goad and family; a sister, Edna Shonkwiler and numerous loving nieces and nephews.

A funeral service will be held at 11:00 a.m. on Wednesday, March 1st, at the BRANT FUNERAL HOME IN SCIOTOVILLE with Pastor John Gowdy officiating.  Interment will be in Memorial Burial Park.  The family will receive guests at Brant’s from 5:00 p.m. until 8:00 p.m. on Tuesday.  Memorial gifts may be made to the Portsmouth Public Library.

To order memorial trees or send flowers to the family in memory of Maxine Goad, please visit our flower store.