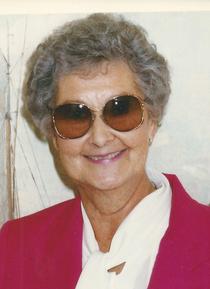 Katherine L. Martin, 91, of Sciotoville, died Sunday, June 8, 2014, at King’s Daughters Medical Center in Ashland, KY. Born on March 12, 1923 in Garrison, KY, she was a daughter of the late Jesse and Flora Thomas Kamer, and a member of Swauger Valley Free Will Baptist Church. Katherine was a very proud Navy veteran of World War II.

Also preceding her in death were a son, Michael Martin, a brother, William Kamer and two sisters, Helen Hunt and Elizabeth Ward.

A Celebration of Life will be held at 11:00 a.m. on Wednesday at the BRANT FUNERAL HOME IN SCIOTOVILLE with Rev. Rodney Evans officiating. Interment will be in Greenlawn Cemetery with military honors by the James Dickey Post of the American Legion.

To order memorial trees or send flowers to the family in memory of Katherine Martin, please visit our flower store.