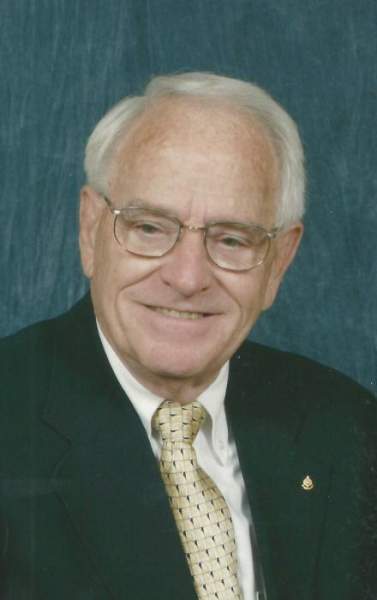 James H. Jarvis, 84, of Wheelersburg, died Sunday, May 22, 2016 in the emergency room of the Southern Ohio Medical Center.  Born on July 18, 1931 in Portsmouth, he was a son of the late Glen and Gladys Alexander Jarvis, also preceded in death by his identical twin, Jackie, in 1932, and was a member of the Temple Baptist Church.

Survivors include his beloved wife of 64 years, Mary Jean (Snyder) Jarvis, a sister, Fran Bowen and a brother, Curt Jarvis. He was a loving father to a daughter, Renee (David) Vest and a son, Mark (Tricia) Jarvis and was a proud grandfather to four grandchildren, Michael and Maxwell Vest, and Sydney and Audrey Jarvis.

Jim graduated from Minford High School in 1949 and the University of New York of Applied Arts and Sciences with an associate degree in Dental Lab Technology 1953.  After college, he served his country in the U.S. Air Force and was discharged from Reserve duty as a Sergeant in 1958.

Jim retired from Detroit Steel, where he served as Treasurer of Local Union 2116 Steelworkers from 1964-1976 and also retired from Scioto County Community Action in 2002.  He was a 61 year member of the Western Sun Lodge #91 in Wheelersburg, were he held many leadership positions, including Master in 1969, secretary for 22 years and treasurer for two years. He also was a 60 year member of Mount Vernon Chapter #23, Solomon Council #79, Calvary Commander #13, Valley of Cincinnati Scottish Rite and El Hasa Shrine of Ashland KY and Eastern Star #516 of Wheelersburg.

A Celebration of Jim’s Life will be held at 7:00 p.m. on May 27th at the BRANT FUNERAL HOME IN SCIOTOVILLE with Pastor John Gowdy officiating.  The family will receive guests at Brant’s in Sciotoville from 3:00 p.m. until 6:00 p.m. on Friday, when a ring ceremony will begin at 6:00 p.m. followed by a masonic service.  A funeral procession will begin forming at 8:30 a.m. on Saturday for a 9:00 a.m. graveside service at Sunset Memorial Gardens.

The family requests that memorial contributions may be made to the Temple Baptist Church, 1148 Gallia St, Portsmouth, OH 45662 and the Endowment Fund of the Western Sun Masonic Lodge #91, 11800 Old Gallia Pike Rd, Wheelersburg, OH 45694.

To order memorial trees or send flowers to the family in memory of James Jarvis, please visit our flower store.