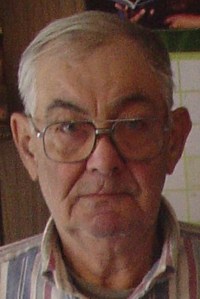 I.N. Show , 85, of Franklin Furnace, Ohio, formally from East Liverpool, peacefully went to be with the Lord on Tuesday, June 18, 2013.  Born on February 10, 1928 in Confluence, Pennsylvania, he was a son of the late Christopher and Anna Reckner Show.

I.N. was still a very young boy when he set out on his own in Pittsburgh, Pa., working in a tire shop and then a butcher shop.  He later owned and operated Show Sanitation Service in East Liverpool, Ohio for many years. He was also an owner/operator in the trucking business and a heavy equipment operator. He was a 20 year member of the Teamsters and the Operating Engineers. In his senior years, it was still early to bed and early to rise. He worked in his Small Engine Repair Shop every day in Franklin Furnace. He bought, repaired and sold all kinds of lawn mowers, weed eaters, chain saws and the like. He had a steady stream of customers who came to him for the upkeep and repairs of their equipment. Shortly after his second wife passed away, he had a bout with cancer and had to have surgery. After only three months of recovery time, he was back out working away in his shop. We joked with him about going "into the shop for a tune-up" too!  He said he still knew how to make an honest dollar. He never quit. We are all quite proud of him. He was an inspiration to all of us.

Surviving are his children, Jim (Bobbie) Show of Lisbon, Kenny Show of East Liverpool, Bill (Kathy) Show of Lisbon, Flo (Randy) Chaffee of Darlington, PA, Josephine Clute of Beaver Falls, PA, Joyce (Ron) Tindell of Darlington, PA, and Mary (Craig) Bollinger of Mogodore, and many grandchildren and great-grandchildren. He is also survived by a sister, Betty and her husband, Verle, of Pennsylvania and a brother, Jim and his wife, Poodle, of West Point. He also leaves his close friends and neighbors, Paul, Willie and Delbert, Marie & Luke, and Frances & John and his faithful companion, Joker. We all love you Pappy.

A graveside service will be held at 10:00 a.m. on Friday, June 21, 2013 at Haverhill Cemetery.  Arrangements are under the direction of the BRANT FUNERAL SERVICE IN SCIOTOVILLE.

To order memorial trees or send flowers to the family in memory of I.N. Show, please visit our flower store.