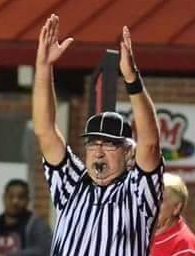 Henry “Hank H.C.” Craft, 61, of Chesapeake, died Thursday, October 6, 2016, at the SOMC Hospice Center.  Born on June 3, 1955 in Portsmouth, he was a son of Paul and Melba Williams Craft.  Hank spent most of his adult life in water distribution for the residents of Scioto County and was a sales representative/consultant of Utilities Service and Supply in Morehead, KY.

Hank was a 1973 graduate of Wheelersburg High School and attended Findlay University on a music scholarship.  He was a much loved referee official for many years and will be honored by East High School for his devotion to music and band and for his on the field-off the field contributions, being a mentor to so many over the years.

Even in death he will still be contributing the only part of his body the cancer hadn’t taken-his eyes so that someone else might see.

Hank was a member of Mt. Pleasant Missionary Baptist Church in Chesapeake.  He is now resting in God’s Glory.

A funeral service will be held at 3:00 p.m. on Monday at the BRANT FUNERAL HOME IN SCIOTOVILLE with Brother Tom Ross officiating.  Interment will be in Vernon Cemetery.

Memorial contributions may be made to the American Cancer Society.

The Craft family would like to extend a thank you to Dr. Summers and his staff at SOMC Cancer Center for their excellent care.

To order memorial trees or send flowers to the family in memory of Henry "Hank H.C." Craft, please visit our flower store.