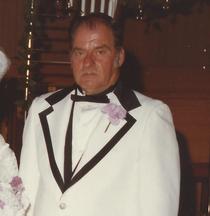 Frank “Smokey” Bender, 79, of Sciotoville, died Sunday, August 10, 2014, at the SOMC Hospice Center. Born on July 22, 1935 in Portsmouth, he was a son of the late Frank and Hilda Penix Bender and retired conductor for the Norfolk and Western Railroad. Smokey was an U.S. Army veteran.

A funeral service will be held at 10:00 a.m. on Thursday, August 14, 2014, at the BRANT FUNERAL HOME IN SCIOTOVILLE with Pastor Jack Howard and Pastor Richard Stiles officiating. Interment will be in Sunset Memorial Gardens with military honors by the James Dickey Post of the American Legion. The family will receive friends at Brant’s from 5:00 p.m. until 8:00 p.m. on Wednesday. Memorial contributions may be made to SOMC Hospice.

To order memorial trees or send flowers to the family in memory of Frank Bender, please visit our flower store.