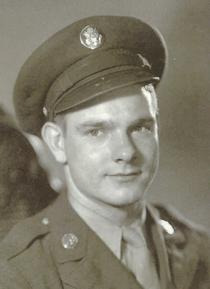 Benjamin J. Wallace, 86, of Sciotoville, died Tuesday, August 26, 2014, at the SOMC Hospice Center. Born on October 13, 1927, he was a son of the late Benjamin Franklin Wallace and Ethel Schwinsberg Wallace. Ben was a World War II Army veteran and retired from New Boston Coke Plant, with 30 years of service. He was a member of Cornerstone Church of the Nazarene and was a member of Aurora Masonic Lodge #48.

A funeral service will be held at 10:30 a.m. on Saturday at the BRANT FUNERAL HOME IN SCIOTOVILLE with Pastor Garry Proehl officiating. Entombment will be in the Memorial Burial Park with military honors by the James Dickey Post of the American Legion. The family will receive friends at Brant’s from 5:00 p.m. until 8:00 p.m. on Friday. A masonic service will be held at 8:00 p.m. on Friday.

Memorial contributions may be made to Cornerstone Church of the Nazarene or Shriner’s Hospital.

To order memorial trees or send flowers to the family in memory of Benjamin Wallace, please visit our flower store.